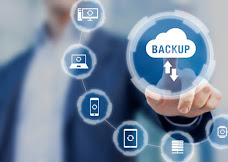 I’m going to sound like Uncle Arthur in “Only Fools and Horses” by saying that, back when I was in IT (a lifetime ago – and I was in positions ranging from mainframe operator for an IT Bureau to the head of global Windows support for a major international bank) it was instilled into all of us that backup of data is a vital facility that would ALWAYS be used.

People outside of the IT industry never appreciate that backing up of data is not just an investment in software or time and effort taken to run the backup – it’s protection of the time and effort already taken in creating the data the backup will be securing.  Software and applications can be replaced reasonably quickly if a device breaks.  Data takes an awful lot longer to recover if, indeed, it’s possible to do so without the data backup.

There’s no need to spend a fortune on software for this - even if the data is being backed up by an automated process within the operating system, at least one has recourse to be able to restore to a point where it may be that only a few hours of effort are lost.  One thing, though, that is paramount, is that the backup needs to be stored away from the device where the data is normally created and modified.  This could be an external drive or a cloud server – as long as it is immediately accessible to be able to restore to the last known point of correct data.

Even the cloud-based accounting software should be backed up – most claim that backups are unnecessary as their systems have failure redundancy in-built.  What they don’t (in general) have is a means of stepping back to a point in the recent past after a flaw has been found in the data.  At least when a backup is taken regularly (and frequently), you can restore back to a point where the data is KNOWN to be correct.  However, cloud-based applications usually have the facility to export all records to a file format that would allow a restore (via import) that could set you back on course.

We all charge, whatever the rate or method, on time spent to create customer data – it’s worth remembering that you might not necessarily get paid for lost time recreating that data.

My advice:  neglect backing up at your peril.

For bookkeeping services tailored to your needs, click here