April 29, 2022
I started in IT in 1975 as an operator on a mainframe, then progressed (if progress is the word...) from mainframe operations, through communications, to global communications co-ordination, and onwards to PC support, trainer, project manager, problem management and IT management.
There is, I reckon, very little that would surprise me when encountering the problems reported by users of all levels.
This, then, is the first in a series of the various issues I have dealt with or come across.
They're all true:
For example, going all the way back to when PCs were in their infancy, the company for which I was working decided to invest in a word processing system built by Wang (no sniggering at the back...).  The desktop machines weren't actually PCs at first, more what was known as "intelligent terminals" which were linked to a mini-mainframe (the one in the picture below is very similar to what we were using - stylish, eh?), and the company then sent me on a "Train the Trainer" course specifically so I could train the workforce in the head office in London.  At the time, the technology in use was a special keyboard, a 14" green cathode ray tube based screen and a printer, usually a daisywheel, which was also attached to the mini-mainframe.
The software that we started training people with was Wang's word processing.  Like I said, desktop computing had not yet really become ubiquitous, with typists and secretaries generally using IBM Golfball typewriters as the peak of technological advancement, so when we suggested that we introduce these desktop systems, the majority of the workforce were happy to try them out. 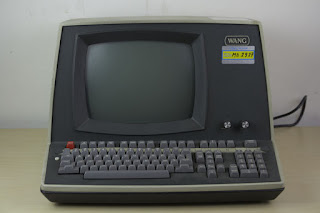 However, the general manager's secretary, a staid, stoic, dyed-in-the-wool secretary, pushed back.  She told us that she didn't have a TV at home and she didn't see why she had to have one at work.  To this day, I still don't know if she was being deliberately obtuse or whether she genuinely didn't understand the concept of word-processing.  I ALMOST gave up on her when she put Sno-pake on the screen when she made a mistake (no joke, she actually did it) as she believed that the words she had typed were coming up on a piece of paper rather than they being electronically represented on the screen.
Also, after convincing her that she should go back to the error she had identified and then cursor back to it and correct it on-screen, she still insisted that the document had to be printed out before the corrections could be made, making our intended paperless office intent a farce.  Eventually, the compromise we made was that as she typed, it would be printed in real-time to the daisywheel printer.
She also figured in another story I still vividly recall: I mentioned earlier that the intelligent terminals had a special keyboard, the top left-hand key of which was a red HELP key (where most modern keyboard have the Esc key - you can see it in the picture of the terminal, above).  This key was used by the technicians in solving machine code issues, in general, and was not for the users themselves.  Our computer suite was on the 1st floor of the building.  The GM's PA was on the 6th.  One afternoon, I was sitting at my desk when the phone rang, which I answered and was immediately harangued by the GM's PA screaming at me down the phone, asking me where the hell I was and why I hadn't been at her desk?  Turns out she'd been pressing the red button for 2 hours because she had a problem and she thought the button was a direct line to the support team!
Recount that to a support person nowadays and they wouldn't raise an eyebrow, but systems today are far more sophisticated than they were, back then.
Thinking back, I also remember an incident when we were in the process of being pitched by various manufacturers regarding the purchase of the word processing system.  One of the suppliers, no names, no pack-drill, proposed that they come to our offices to demonstrate their offering at first hand.  Accordingly, a stated date having been appointed, we prepared a space in the machine room in front of the communications equipment racks, as they wanted to connect to the internet. 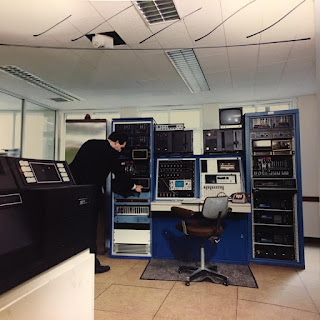 I would state at this point that to "connect to the internet" was not quite the same back then as it is now - much, MUCH slower and, in our case, a dial-up BT line.  In the rack where the connection to the outside world was installed, there was a similar shaped plug used for the Telex connection (about where my hand is in the picture - yes, that's me - WITH HAIR!).  This was powered with DC rather than a standard comms port which was much lower voltage.
Anyway, the supplier arrived:  a technician with the equipment  accompanied by the coolest salesman I ever met in my many years in IT.  He didn't appear to be THAT cool at first, but that came later.  So, the techie hooked up the equipment and the salesman (I'll call him Peter) gave us his spiel, during which time he rested his right elbow on top of the screen while he explained how things worked.  About 5 minutes into his pitch, white smoke started billowing out of the back of the screen: after a few seconds, Peter noticed the smoke out of the corner of his eye, leaned back a little, looked at the smoke, leaned forward again and, without missing a beat, said "And this amply demonstrates the way the extractor fan works." - cool, or what?  About £6,000 (this was in 1980 or thereabouts) worth of pristine machinery, literally up in smoke, and he didn't even break sweat...
We then discovered that the techie had inadvertently hooked up the cable to the Telex port in the rack instead of the one intended for dial out to the internet, the voltage then overloaded the circuitry inside the equipment and fried it, hence the smoke.  Pity, I preferred that supplier to Wang but hey, ho...
For the sake of attempting not to bore you, I'll leave this episode at that point.  Stay tuned for the next one