Pride goes before destruction, a haughty spirit before a fall - true tales from an ex-IT support man Episode 5

June 06, 2022
Throughout life, one learns what is, and what is not, behaviour conducive to a professional demeanour. 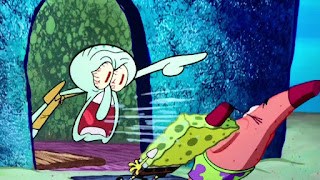 In this edition of the blog, I will be setting out the hard lessons of life learned by me in my early career, when I was still wet behind the ears and when my parents were saying to me (as I said to all three of my daughters) "Why don't you leave home now while you still know everything?"
Three examples of this "not-well-thought-out" behaviour sprung to mind when composing this blog, which happened at the start of my long IT career, but which stuck with me through life: each provides a moral that translates into adulthood.
First, I'd like to recount the tale that bears out the proverb that Idle hands are the devil's workshop. As I have mentioned in previous blog editions, although the bureau work was quite often fast-paced, with jobs being run in quarter-hour chunks, one after a relentless other, there were also frequent runs which looked after themselves for several hours at a time. In these cases, to try and remain awake in case an urgent action was required (for example, putting more water in the kettles which were boiling at each end of the computer room to maintain the humidity, or replacing a tape or box of paper) we had to devise distractions. One such distraction, while a good idea at the time (we thought) was using the lid of a mini-tape canister as a frisbee which Brian (you remember Brian? ...the sadist who introduced me to the inner workings of my nemesis that was the 1933 barrel printer) and I would casually throw to
each other the length of the computer room, some 60 feet or so. At first, it kept us amused but, after a fairly short while (maybe an hour...?) one of us decided to modify the throw to make the activity more interesting. This might involve throwing high so that whoever was standing at the tape machine/racks end of the computer room would have to leap to catch the frisbee, as result of which might be careering into the tape decks, not exactly the most forgiving of units in terms of movement, or perhaps crashing into the tape racks (which were more forgiving in terms of movement) meaning that the catcher would spend the next 20 minutes returning the tapes to the racks in the correct order. 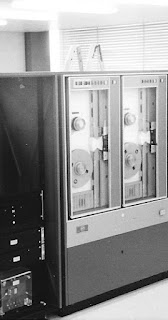 However, I discovered (while working alone in the machine room and trying to keep myself amused) that the colour of the floor, which was covered in shiny grey vinyl tile, afforded disguise to the trajectory of the lid/frisbee and also that if I were to throw the frisbee angled downwards at the floor, it would then fly at an upward angle towards the catcher. Without having pre-warned Brian of my discovery, I used this tactic. Brian must have lost sight of the canister lid in the floor colour and was thus unable to defend himself from the lid which hit him square between the eyes, broke his glasses, spilt the bridge of his nose (very satisfactorily, in my opinion) and sent him, as mentioned above, crashing into the tape rack.

So, there was he, sitting on the floor among thirty-something tape canisters, with blood dripping down his nose, trying to repair his spectacles and then having the temerity to moan at me because I had suggested he put the tapes back. All I'll say is that it was at a time of my life where I could actually run rather than, as at present, waddle, and he chased me all around the building, with encouragement from the IBM suite team as I sped past their machine room on the 1st floor. Eventually, Brian gave up the chase, but he got his revenge several days later...
Which brings me to the second example of this juvenile behaviour. This time it was a combination of my hubris and Brian's sense of retribution (which he attributed to a "learning opportunity"). I doubt whether they are still in wide use but in those days (mid-1970s) data was input to the processor via punched card or tape. The former of these was more commonly used for actual data as tape was usually slower and used for lower volumes of data and was introduced into the machine via a card reader - the one in our machine room was a 300 cards-per-minute reader, where the cards were added to a hopper in the correct order and then run through the reader. 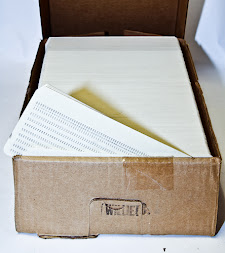 One particular job we ran was for that motoring recovery company, where they would need several thousand punched cards input to run the printout of their membership cards. The data was prepared by the ladies in the punch room adjoining the machine room (you may recall that these were the ladies who almost wet themselves when I was being eaten by the printer on my first day) and the punched cards were then replaced in the box they came from before being sent to us for processing. Fortunately, for me at least, before the boxes were passed to us a recognisable pattern, maybe an "x"  with a permanent marker, was drawn onto of the 1,000 cards in the box, corner to corner. The significance of this will become clearer in due course..
As I said, the membership card run required several thousand cards. The boxes were numbered, and the cards were SOMETIMES also numbered but, more often than not, the ink on the punch machine ribbons which would mark each card with a batch serial number was almost invisible. Anyway, on one particular occasion, the ladies asked for one of us to collect a batch of cards for processing and, as I was the sprog and considered "the boy" I was delegated with the collection.
There were 9 boxes, as I recall. May have been more, but 9 is a sufficient number to describe what happened. Rather than place the boxes on the tray, I decided to display my machismo and pick all the boxes up at the same time  - this meant that the boxes were stacked in my arms and actually reached to a height which meant I was unable to see where I was going, and these boxes weighed several kilograms each. I staggered out of the punch room, through the operations room and, having successfully negotiated the 9" step up into the machine room (there was a false floor in the machine room which allowed cables, power etc to be installed and also for the air-conditioning to circulate under the machinery) and made my way over to the reader, which was sited next to that damned 1933 printer. 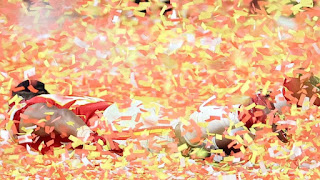 What I was unaware of was that Brian had ducked down between the printer and the reader and, just as I passed the printer, he stuck out a foot and tripped me up, causing me to discharge my boxes in a most undignified manner. The boxes flew upwards and outwards, at the same time opening and depositing their contents all over the computer room floor. The nearest thing I can relate to is confetti at the Superbowl.
Once again, the ladies in the punch room had to change their underwear having again wet themselves laughing, while I was left to sort out 9,000 poorly marked punched cards back into their correct order. Four hours, it took. FOUR HOURS!!!
Moral of the story? check the title of this edition for a hint.